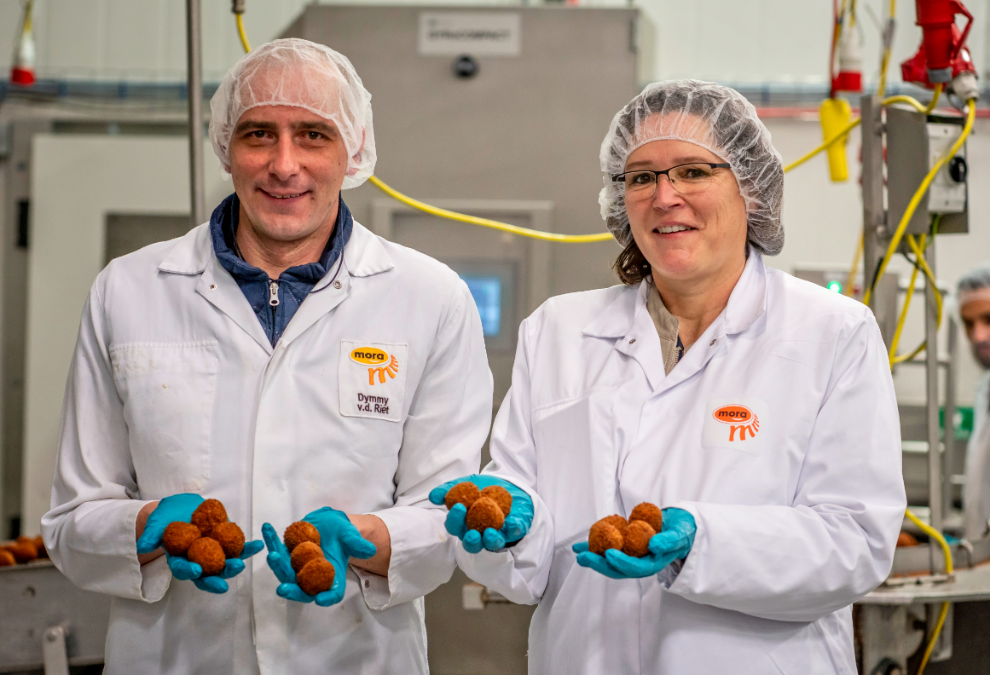 Dymmy van de Riet (operator) and Madelon Hermes (site manager) are seeking employees to help them juggle all the balls.

“Mora is part of the Van Geloven Group. Some years ago, Van Geloven was acquired by McCain, a Canadian company and the world’s largest manufacturer of frozen potato products. McCain wants to roll out the ‘Appetizers’ category in Europe, and the Van Geloven Group is a key part of its strategy –more specifically, the Mora facility in Maastricht,” Madelon tells us.

She explains. “The Maastricht facility produces a wide range of products, from mince-meat hotdogs (frikandel), croquettes and eggrolls to Mora’s own smulrol, a rolled pancake with a savoury filling. And we’re working on new products here, like our vegetarian frikandel. Our wide array of products makes Maastricht an outstanding location for McCain’s appetizers. So we’re adding an extra production line and that means we need more space. For one thing, we’ll need an extra building for our packaging line, because we’re quite cramped as it is.”

Mora needed various permits for the expansion. “The Maastricht Business Team helped us obtain the necessary permits. They mediated and kept the ball rolling so that we could start construction as planned. That’s really been a help to us. If construction had been delayed, it would have had a serious impact on McCain’s strategy. The Maastricht Business Team also attended a working visit by a representative of Canada’s Ministry of Economic Development. We discussed how the new production line would be organised and cooperation between McCain, Van Geloven and the municipal authorities.”

To recruit employees to operate the extra production line, Mora now has about fifty job openings. “That’s quite a lot. We need everything from maintenance mechanics to production line workers. We’re mainly looking for operators, the workers who operate the machinery. We’ve asked the municipal authorities for help with recruitment too. For example, VDL in Maastricht has cut a number of jobs. Our question was how to get in touch with VDL about transitioning their redundant employees into our job openings. After all, they have too many people on their payroll and we don’t have enough. Joop Timmermans of the Maastricht Business Team acted as our liaison with VDL’s outsourcing office.  They set up a meet and greet between the companies to explore whether we might work together. But he also got the procedure underway with the Employee Insurance Agency UWV.”

Madelon has nothing but praise for the Maastricht Business Team. “The municipal authorities regularly organise meetings for the 30 biggest Maastricht-based companies. Recently, for example, we visited Thomas Regout, where they make telescopic slides for drawers. The meetings aren’t so much about what the company makes as about all the other factors involved. In this instance, we talked about recruitment and selection. What problems are we encountering? What can we learn from one another? The topics ranged from employee safety to training and beyond. The mayor and executive councillor attended the meeting as well.”

“We don’t have to put the Mora brand on the map. We’re already there. But it wouldn’t hurt to boost the profile of the Maastricht facility. Our building on Fregatweg isn’t very impressive and people coming to visit us often drive right past it. That’s awkward for a company like ours. We would like to give our building more exposure, for example with an LED board. But that means applying for another set of permits. We’re planning to do that, and we’ll naturally be asking the Maastricht Business Team for help.”